While many stay for many days (an average stay at Camping Griffon is 3-4 days), some of you are just quickly passing through. For some, it will be a scouting trip, during which they will identify their favorite part of the Gaspé and then come back and stay longer in that particular area. Others are overseas tourists trying to cover as much distance as they can during their Canada trip. Whichever category you fall into, here is my Guide to visiting the Gaspé-Forillon for those who have a need for speed!

The Jewel of the Area: Forillon National Park

I am relentlessly promoting the national park. It’s a place I know well, it was my workplace for 12 years as a guide. While I share information, I am sometimes noticing that for some visitors, the word park has a negative connotation. These people are often of limited mobility and associate the word park with a long physical effort to reap the rewards of a beautiful scenery. However, in there lies the absolute beauty of Forillon! It’s a park I like to label as  ‘accessible’, a place where you can see magnificient landscapes such as the ones featured below, even without straying too far from the vehicle  (all following photos were taken at most a few steps from the car) : 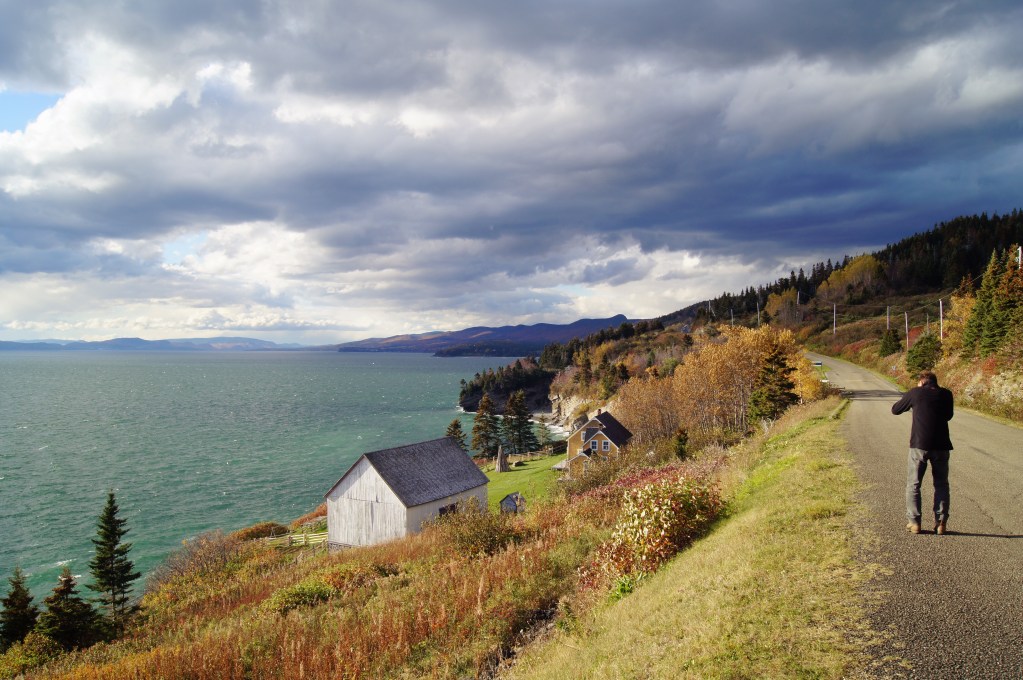 So, for those of you with limited time of mobility: even if you only have a little bit of time, take at least the opportunity to ride through the North and South areas of the park. Go to Cap-bon-Ami and take in the stunning landscape. Follow the 132 all the way to the South Area and drive to the end of the road. Even if your Forillon visit is fast, it will allow to discover at least some of the beauty of Forillon. 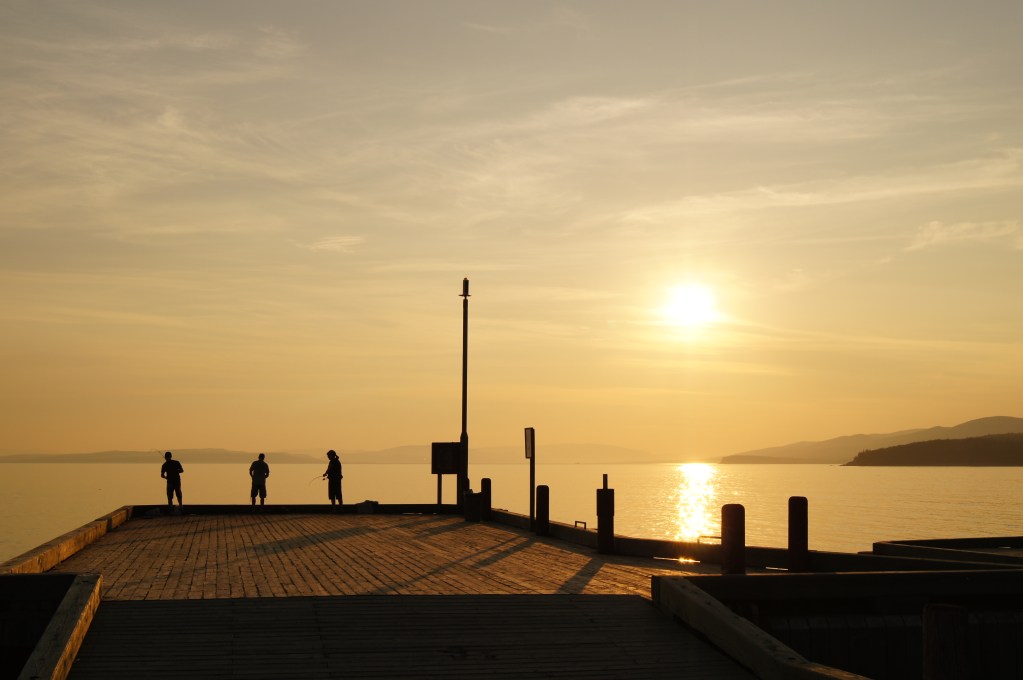 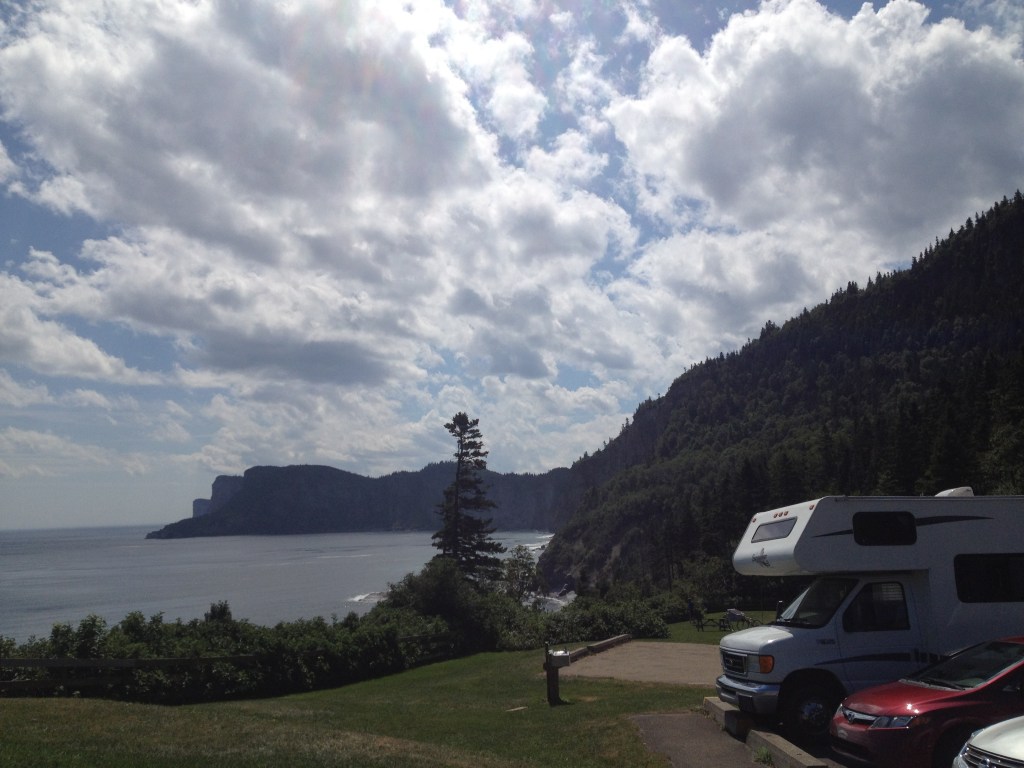 Time needed with a departure and return to camping Griffon with a few photo stops : 2 hours

Notes : The road to Cap-bon-Ami is quite steep. It may be best to not bring towed equipment. Entry fees are waived for the 2017 season, as a celebration of Canada’s 150th .

If you have more time, add some of these items to your visit:

Tell us how you maximized a short visit to Forillon. Did you come back later for a longer stay?

La Vallée and Le Portage are hidden gems inside Forillon National Park, cutting between the spine of the Appalachian Mountains and connecting L’Anse-au-Griffon in the north with Penouille in the south. A 9.2 km loop makes for a serene and beautiful nature hike, horse-riding tour, cycle ride, or jogging trail.

L’Anse-au-Griffon river winds lazily down the valley, separating the trail into two. One half of the trail loop is mostly clear and flat, while the other loop is more hilly, and runs through a forest. In the middle is a stretch of grassland.

The valley contains the remains of part of L’Anse-au-Griffon village. The villagers took advantage of the fertile and wooded area to run sawmills and farms in service of the coastal areas, where fishing predominated. The farms and businesses here were appropriated during the establishment of Forillon National Park. Although no farms or buildings remain on that land today, many apple and lilac trees, residues of the original farm gardens, can be seen growing wild.

The trail is very well maintained by Parks Canada, and has two shelters, and some picnic benches, so you can spend an hour or two exploring, and then rest in peaceful surroundings.

It is very easy to see wildlife here – regularly while jogging I see moose, bears, porcupines, hares, and foxes. More rarely I have seen skunks, coyote, and deer, although those are more shy.

The moose are most likely to be seen early in the morning or at twilight, or on a day of mist or light rain. Porcupines can be spotted on the trail edges at any time. They move slowly and aren’t afraid of anything, so you’ll have plenty of time to take pictures. Bears may be spotted at any time in the day and tend to be in the ditches or hedges, where they find berries and twigs to eat. Sometimes you can spot them in trees. Hares and foxes are common but wary and you will probably just see them bolting away from you.

Be respectful and careful around wildlife – here’s some good advice on how to avoid a bear encounter. But don’t be afraid – it’s an amazing experience to see these animals in their natural environment.

In the winter, these trails are groomed for cross-country skiing by local volunteers.

You can read more about La Vallée, and other Forillon National Park hiking trails, on Parks Canada’s website here.

Cap-Bon-Ami, in the north sector of Forillon National Park, appears wilder and more rugged than the south sector. The end of the road in the north area leads to what most would deem the most beautiful view of Forillon!

Arriving at Cap-Bon-Ami, one cannot help but notice it is an open book on geology with rock layers fully on display, each formed over thousands of years. The small ledges eroded over time are prime nesting real estate for marine birds. From March to August, cliffs and ocean teem with flocks of cormorants, murres, guillemots, gulls and most of all, black-legged kittiwakes, this notably being home to Eastern Canada’s most important colony of the species.

Other fauna that can be seen in the area among others are: groundhogs, porcupines, bears (no need to panic!) and eagles. The neighbouring waters are also frequently visited by seals, dolphins, and whales throughout the season. The lookout on ‘Le Quai’ rock then leads to a staircase allowing you to explore the pebble beach below.

With so much to spot, best bring your binoculars!

Departing from Cap-Bon-Ami, the Mont Saint-Alban trail is well worth the hike and winds along a cliff-side. It is extremely steep at first – but don’t give up! (You can do it! In all my years of working as a guide on this trail, I have brought people of all ages, the oldest being 90.) On the way to the tower 5 lookout points, each with a different view, will provide a breathtaking spot to catch your breath.

The trail is well sign-posted, maintained, and fenced by Parks Canada, but use caution as you are ascending and descending and wear proper footwear (no sandals). A leisurely pace will bring you to the tower in about 50 minutes (2 km) with some energy left to enjoy the view! The descent should go much faster.

From the Mont Saint-Alban tower, one can see some of the park’s most spectacular geographic features, including Cap Gaspé at the tip of the park, Bonaventure Island, Cap-des-Rosiers with its prominent lighthouse and downtown Gaspé. Some say that on a clear dry day one may see Anticosti island across the Gulf of St-Lawrence but it is a feat I have never personally achieved despite many attempts.

From the peak, you may notice that the landscape is sharply divided between flat lower lands and rugged mountains. Both seem very different and, with good reason! Geologically, the rocks where the lighthouse stands are about 100 million years older than those forming Mont Saint-Alban. The presence of many varied geological eras in this relatively small area is one of the reasons Forillon was granted national park status. These unhospitable rocks also lead to the presence of mysterious arctic-alpine plants which have grown on these cliffs since the end of the last ice age.

On your way back to the parking lot, take a last breather in the shelter (providing bathrooms and drinking water fountains). On a chillier day, a fellow hiker may have even started a little fire in the wood stove, knowing others will appreciate the cozy reception.

Every year, usually the second Sunday of August (check with Festival de Musique du bout du monde), a very special concert is held here at sunrise. The music and the sunrays on the cliff mix in a magical experience.

Read more about this hiking trail, and others, on Parks Canada’s website.

Time to reach Cap-Bon-Ami from Camping Griffon: 20 minutes, about 20 km. Entry fees are waived for 2017, in commemoration of Canada’s 150th.

Please share your memories of Cap-Bon-Ami in the comments below!